Broadband Cost Reduction Directive: summary report of the consultation for its review

The summary report of the open public consultation regarding the evaluation and review of the Broadband Cost Reduction Directive takes stock of the contributions and presents preliminary trends that emerge from them, focusing on their quantitative aspects. The objective of the public consultation, which took place from 2 December 2020 to 2 March 2021, was to gather stakeholders’ views and inputs on the implementation of the Directive to support its evaluation, as well as on possible future adjustments with a view to support the preparation of a revised legislative proposal.

Disclaimer: the views presented in this factual summary report are not the views of the European Commission but of the stakeholders that participated in this open public consultation. It cannot in any circumstances be regarded as the official position of the Commission or its services.

Objectives of the consultation

The Broadband Cost Reduction Directive aims to facilitate and incentivise the roll-out of high-speed electronic communications networks by lowering the costs of deployment with a set of harmonised measures. The responses to the public consultation complement and update evidence gathered so far by the Commission, including the report on the implementation of the Broadband Cost Reduction Directive and the continuous monitoring of its implementation in the Member States as well as market and technological developments which happened since its adoption.

The review of the Broadband Cost Reduction Directive (“the Directive”) is part of the actions announced in the Communication on ‘Shaping Europe’s Digital Future’ (COM (2020)67 final) and instrumental for achieving the connectivity objectives set by the Commission in the Communication for a Gigabit Society (COM(2016) 587 final) in Europe as well as the objectives and targets embraced by “2030 Digital Compass: the European way for Digital Decade” (COM (2021) 118 final).

The public consultation had as objectives to collect views on:

Who replied to the consultation?

Fig. 1: Distribution of responses to the public consultation by type of respondent. 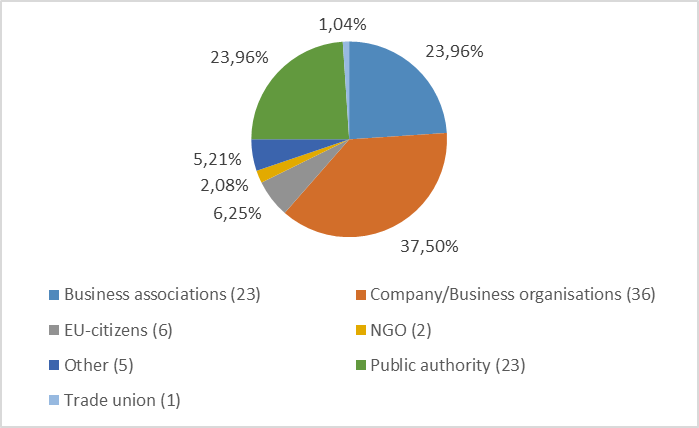 Fig. 2. Distributions of responses per country. 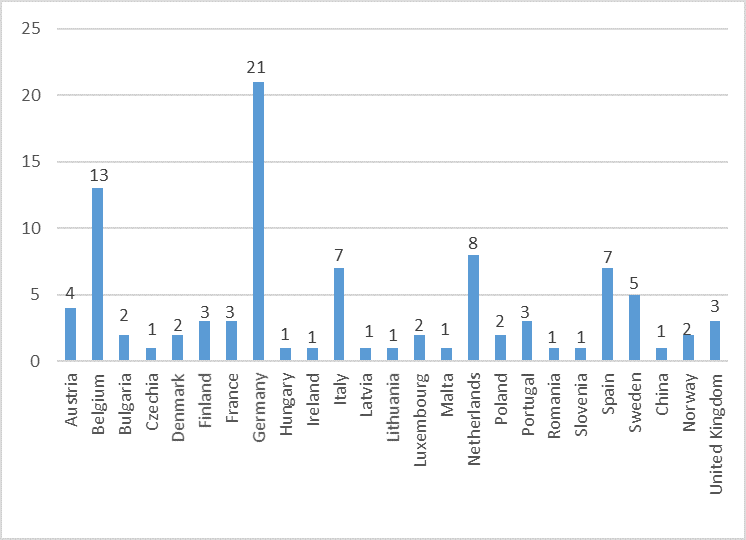 The respondents' profiles reflect the self-selecting nature of public consultations and call for caution when interpreting the results, since they cannot be considered as a representative sample of all European stakeholders or of all stakeholders within a category of stakeholders, nor do their comments represent equal weight (e.g. European associations representing several electronic communications operators from various Member States vs. individual opinions). While three NRAs participated in this public consultation, the Board of European Regulators for Electronic Communications (BEREC) has provided a separate opinion covering overall the same aspects.

On average, sections had more than 70% active participation (unless otherwise specified, by “respondents” we mean those who actually responded to the specific question/s given that respondents were free not to respond to all questions or sub-questions, according to their knowledge or specific interest). Without prejudice to the in-depth analysis of the replies, we can observe the following overall trends.

Drivers to timely and efficient deployment of electronic communications networks

Overall functioning of the Directive

Fig. 3. EU added value of the harmonisation brought by the Directive through various factors.

As regards the general objectives of the Directive, 20% of respondents consider the Directive effective in facilitating the roll-out of high-speed electronic communications networks at lower cost, while 26% remain neutral and 43% consider it not effective enough. As regards its operational objectives, 19% of respondents consider the Directive effective in reinforcing the coordination of civil works and 11% in reducing the time and cost of permit granting, versus 48% and 51%, respectively, that consider it ineffective. The reasons raised are, for example, the persisting barriers for network roll-out, the lack of uniform and digitalized administrative procedures and of coordination between various public administrations or the insufficiently effective Single Information Point. 34% of respondents consider that the Directive facilitated and incentivised the roll-out of electronic communications networks thanks to access to existing physical infrastructure and related transparency measures, 28% as a result of coordination of civil works and related transparency measures, 29% as a result of access to in-building physical infrastructure and related access measures, 28% due to competent bodies and other horizontal provisions, and 25% owing to permit granting procedures.

Access and availability of physical infrastructure and coordination of civil works

As regards the magnitude that the costs linked to physical infrastructure represent in relation to the overall costs of deployment of fixed and mobile/wireless networks, only less than 40% (fixed) and 20% (mobile/wireless) of all participants to the public consultation provide their related estimations (the vast majority were company/business organisations or business associations representing electronic communications network operators). About three quarters of respondents consider such costs as being above 60% in the case of fixed networks and above 40% in the case of mobile/wireless networks (Fig. 4).

Fig. 4: Percentage that costs linked to physical infrastructure represent in relation to the overall costs of deployment of fixed and mobile/wireless networks. 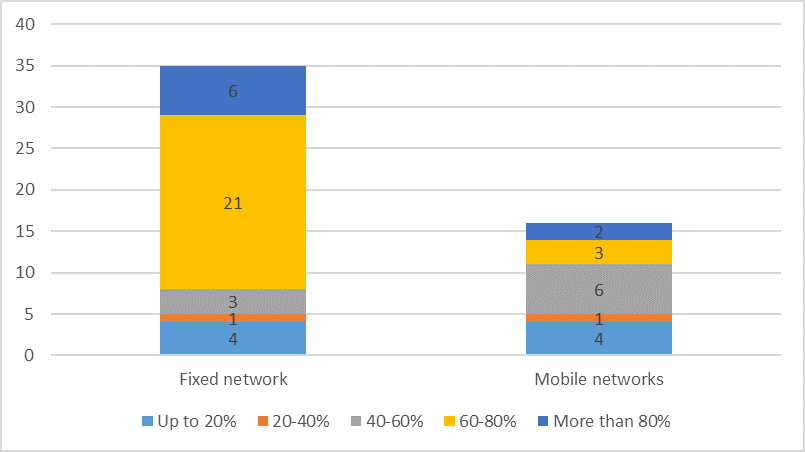 Fig. 5: Factors that led to a more costly or lengthy network deployment with respect to access to existing physical infrastructure. 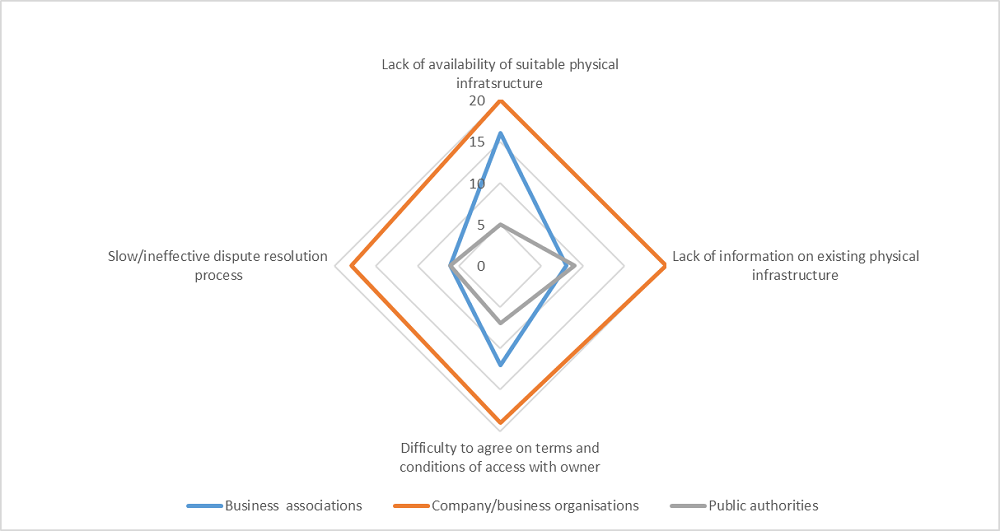 67% of respondents indicate that current provisions on high-speed-ready in-building physical infrastructure as provided in the Directive have had at least some relevance in facilitating the deployment of electronic communications networks.

More than two thirds of respondents consider that coordination of civil works between electronic communications networks (71%) or with transport networks (including railways, roads, ports and airports) (68%) and electricity networks (including public lightning) (67%) would have a certain degree of relevance for the deployment of electronic communications networks, while more than half of respondents also indicated gas, water and heating networks.

Fig.6 Relevance of coordination of civil works between electronic communications networks and other types of networks.

As regards minimum information concerning physical infrastructure that should be available to operators seeking to deploy electronic communications networks beyond that specified in Article 4(1) of the Directive, 74% of respondents indicate georeferenced location and/or route and 40% of respondents indicate total and spare capacity to host network elements (e.g. nr. of ducts, m2 of available space).

More than 60% of respondents consider the information provided in Fig. 7 to be relevant to facilitate network deployment if the information was constantly updated through the Single Information Point. 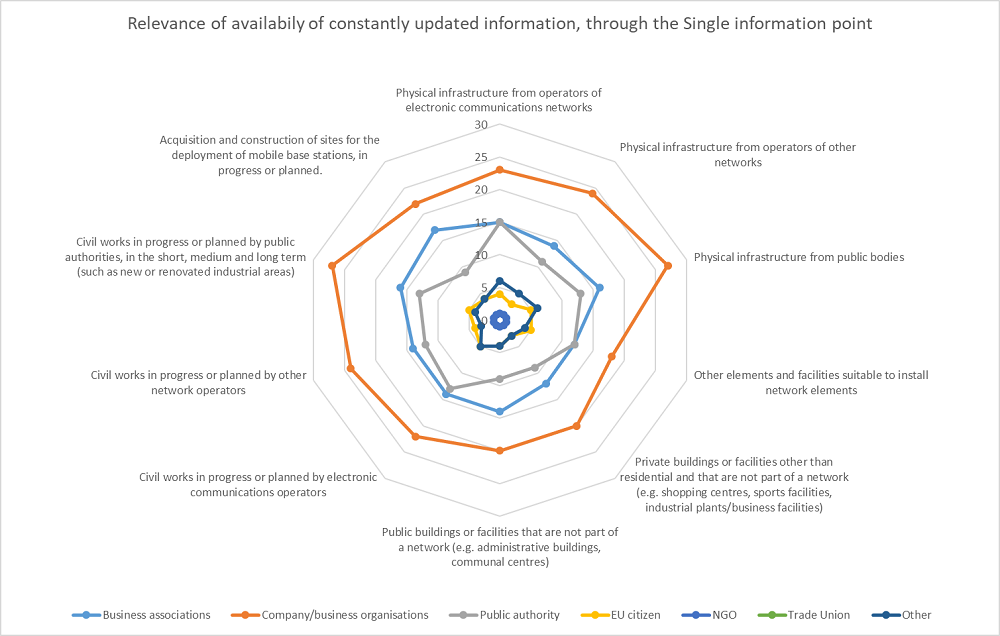 As regards potential measures for streamlining the permit granting procedures to roll-out electronic communications networks, the respondents indicate (see Fig.8): the availability of an integrated permit granting procedure that encompasses all different procedures of each of the competent authorities involved and of the possibility to submit permit applications by electronic means (93%); a single entry point (one-stop-shop), acting as an intermediary, routing permit applications to any competent authority (national, regional or local) (89%); coordination and monitoring by a single body (or set of bodies) of permit granting procedures by all the authorities’ in charge (62%); the harmonization of permit procedures at Member State level (75%) or at EU level (59%) and the centralisation of the competence for all permits in one authority within the Member State (58%). 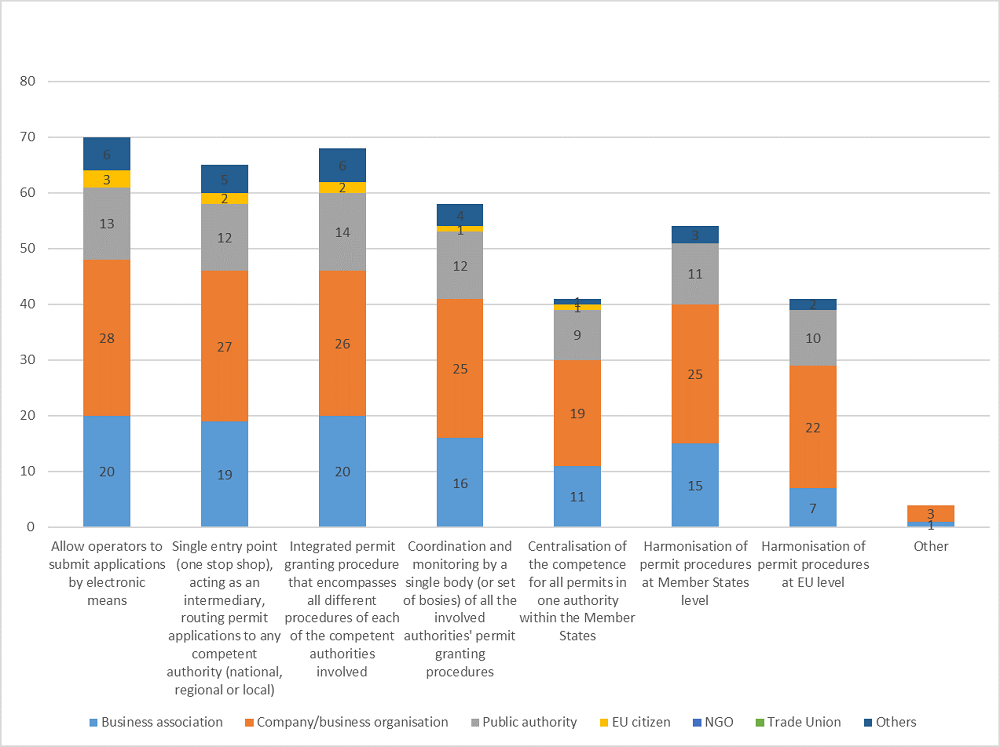 72% of respondents consider that the manufacturing of the equipment, materials used and logistics would contribute to the environmental impact resulting from the deployment of electronic communications networks, while 58% and 56% indicated, respectively, the deployment techniques (e.g. type of trenching) and the type of networks (e.g. fixed or wireless/mobile) as contributing factors.

In general, while a minority of electronic communications network operators consider the dispute resolution system to be effective, the view of public authorities is in general much more positive.

More than half (53%) of respondents agree that setting rules on apportioning of costs (in case of coordination of civil works) would guarantee a satisfactory dispute resolution process (53% of business associations, 39% of company/business organisations and 37% of public authorities), while 44% consider that this would be ensured by imposing penalties on the dispute resolution body if resolution is not issued within the deadline (35% of business associations, 46% of company/business organisations and only 6% of public authorities that responded to the relevant question).