eGovernment Benchmark 2019: trust in government is increasingly important for people

The 2019 eGovernment Benchmark report shows remarkable improvements in the Transparency and Key enablers indicators.
Even though there is still a significant gap between the leaders and laggards in eGovernment in all four Top-level benchmarks, it has been steadily narrowing in the last few years.
The report also highlights how trust in government is increasingly important for people.

An advancing digital economy and society impacts the routines of people, and this can only work if people trust the organisation that is accountable for that change.

The eGovernment benchmark 2019 report reveals that the European front-runners in eGovernment are Malta, Estonia and Austria. These countries score highest in terms of overall maturity. Latvia, Lithuania and Finland follow close behind. In general, countries in the southeast of Europe score below the EU28+ average of 65%. 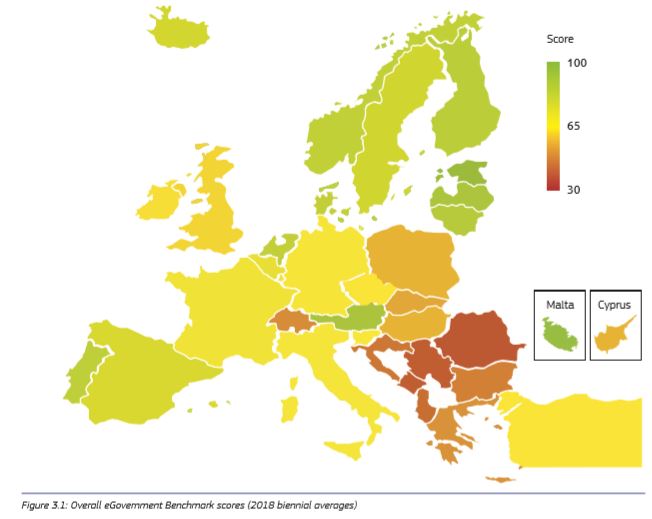 Where does the EU fare best? Where should we improve?

Progress is visible for all four top-level benchmarks. Europe is most advanced in terms of User-centricity, showing that public administrations keep an eye on user needs and preferences. Despite improvements, further efforts are needed to uplift the eGovernment dimensions of Transparency, Cross-border mobility and Key enablers.

Last year, the eGovernment Benchmark included the results of the first security pilot tests on public websites. This pilot has been repeated in the assessment this year. The results show that there is still work to be done in order to strengthen the security of online public services.

How is performance measured?

Overall performance is measured as an average score of four top-level benchmarks (which each comprise multiple sub-indicators):

The top-level Transparency benchmark scores 62% for the EU28+ average, with a low score on the Service delivery indicator (55%) and a higher score on the Public organisations indicator (72%).

The Key enablers Top-level benchmark stands at 58% (EU28+ average). The eID and Authentic sources indicators score 54% and 55%, the eDocument and Digital Post indicators score a higher (65% and 63%). 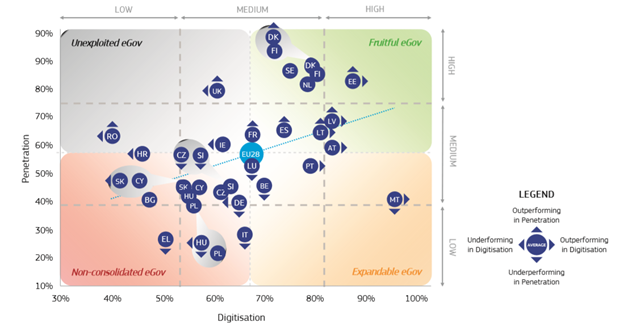 Bulgaria, Cyprus, Finland, Ireland, the Netherlands, Poland and Sweden perform in line with relative indicators, i.e. they match expectations based on their characteristics.

Belgium, Czech Republic, Greece, Italy, Luxembourg and Slovenia are underperforming in Penetration given their country characteristics, while they perform according to expectations in terms of Digitisation.

Looking at Digitisation instead, Croatia and Slovakia are underperforming, while they are performing in line with Penetration averages. Germany and Hungary are the only countries showing a relative performance below the European trend, both in Penetration and in Digitisation.

The eGovernment Benchmark report evaluates progress on key components of the eGovernment Action Plan 2016-2020, the Tallinn Declaration and the accomplishment of a European Digital Single Market. The eGovernment Benchmark uses 8 life events to capture the landscape of public services. Each life event is measured once every two years: Business start-up, Losing and finding a job, Studying and Family are observed in the even years, Regular business operations, Moving, Owning and driving a car and Starting a small claims procedure in the odd years. Given the methodological update in 2016, only a select number of indicators allow for comparisons over time.