The 79th edition of the Venice International Film Festival will take place from 31 August until 10 September 2022, with the participation of 9 EU-supported films under the Creative Europe MEDIA programme. MEDIA will also host 3 events under the theme ‘Europe in Focus’ at Venice Production Bridge.

Among the list of audiovisual works featured at Venice International Film Festival, nine have been supported by Creative Europe MEDIA programme in their development. Four are shortlisted for the prestigious ‘Orizzonti competition’, honouring films that represent the latest aesthetic and expressive trends.

The Awards under this section are for Best Film, Best Director, Special Orizzonti Jury Prize, Best Actress, Best Actor, Best Screenplay and Best Short Film. The winners will be announced on Saturday 10 September during the closing ceremony.

Additionally, ‘Riget Exodus’ by Lars von Trier (DK) will be showcased in the 'Out of Competition' section.

Four other have been selected for the independent section ‘Giornate degli Autori’, formerly Venice Days, and now in its 19th edition - held in parallel to the festival. The winners will be announced on Friday 9 September.

During the VIFF, Venice Production Bridge will organise the Venice Gap-Financing Market, a 3-day event (2 to 4 September) to help producers secure financing for their projects through in-person one-to-one meetings. Among the 11 selected VR works, one was supported by MEDIA for its development: 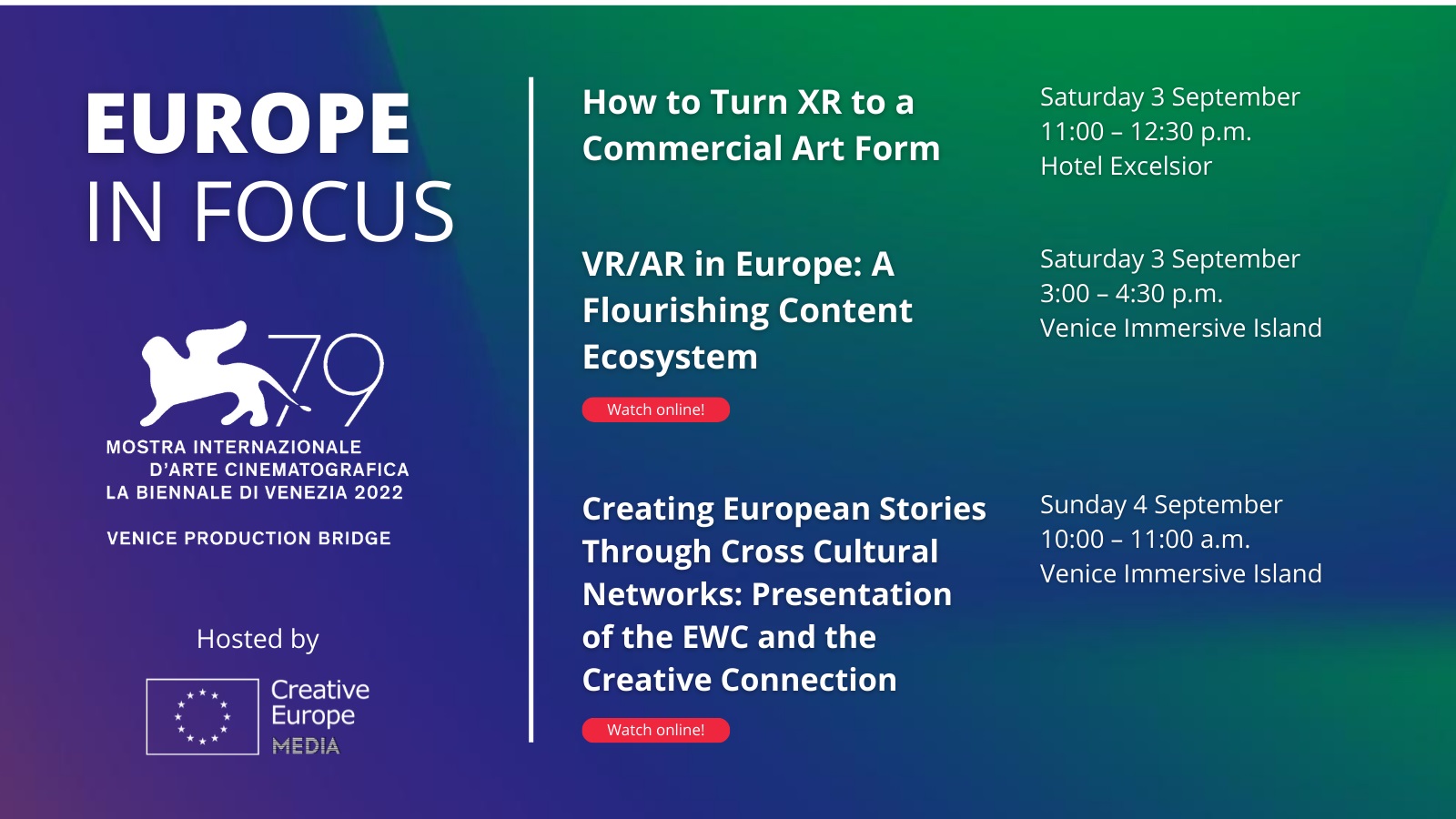 How to turn XR into a commercial art form

Starting from the experience of VR projects supported by Creative Europe MEDIA, the panel discussion aims to explore how to make immersive content and new forms of creation accessible to a wider audience through innovative models for collaborations, sales strategies and circulation.

Following the presentation of the strategic paper on VR/AR in Europe published by the Commission, the panel will focus on the flourishing European VR/AR content ecosystem, and how these technologies are bringing high-quality European stories out in the world. As a truly international and cross-disciplinary format, how do we ensure the best conditions for Europe? How does the findings in the strategic paper reflect real-world conditions? And what’s next for Europe’s flourishing content ecosystem?

Creating European Stories Through Cross Cultural Networks: Presentation of the EWC and the Creative Connection

In 2021, the Commission launched a first call for proposals “Writing European” to support creative hubs that will act as accelerators or incubators of scriptwriting talents. Selected projects, European Writing Club (EWC) and European Writing Club, will select and guide writers from conceptualisation to the actual writing of fiction series projects and potential matchmaking with buyers. The event will be an occasion to present the two projects selected in the pilot action “Writing European” in 2021.

MEDIA Sub-programme of Creative Europe is designed to support European film and other audiovisual industries. It provides funding for the development, promotion and distribution of European works within Europe and beyond. It invests in the training of producers, film distributors, directors, and screenwriters to help them adapt to new technologies. Each year, MEDIA supports around 2,000 European projects including films, TV series, video games, training programmes, cinemas and much more.