I-DESI 2020: How digital is Europe compared to other major world economies?

EU countries outperform their global counterparts in terms of digital skills, from basic to advanced, but they consistently lag behind in the digitisation of public services, a newly published study shows. The International Digital Economy and Society Index (I-DESI) analyses how EU countries rank in terms of connectivity, digital skills, use of internet, integration of digital technology and digital public services in contrast with 18 other non-EU countries.

The very best EU countries are at the same or a higher level than the best global countries.  Finland was the leading country in the I-DESI index, also ranking first in the 2019 and 2020 DESI. The leading non-EU country was the United States and EU27 Member States filled four of the top ten positions for the main I-DESI index, followed by Switzerland, Norway and Iceland. 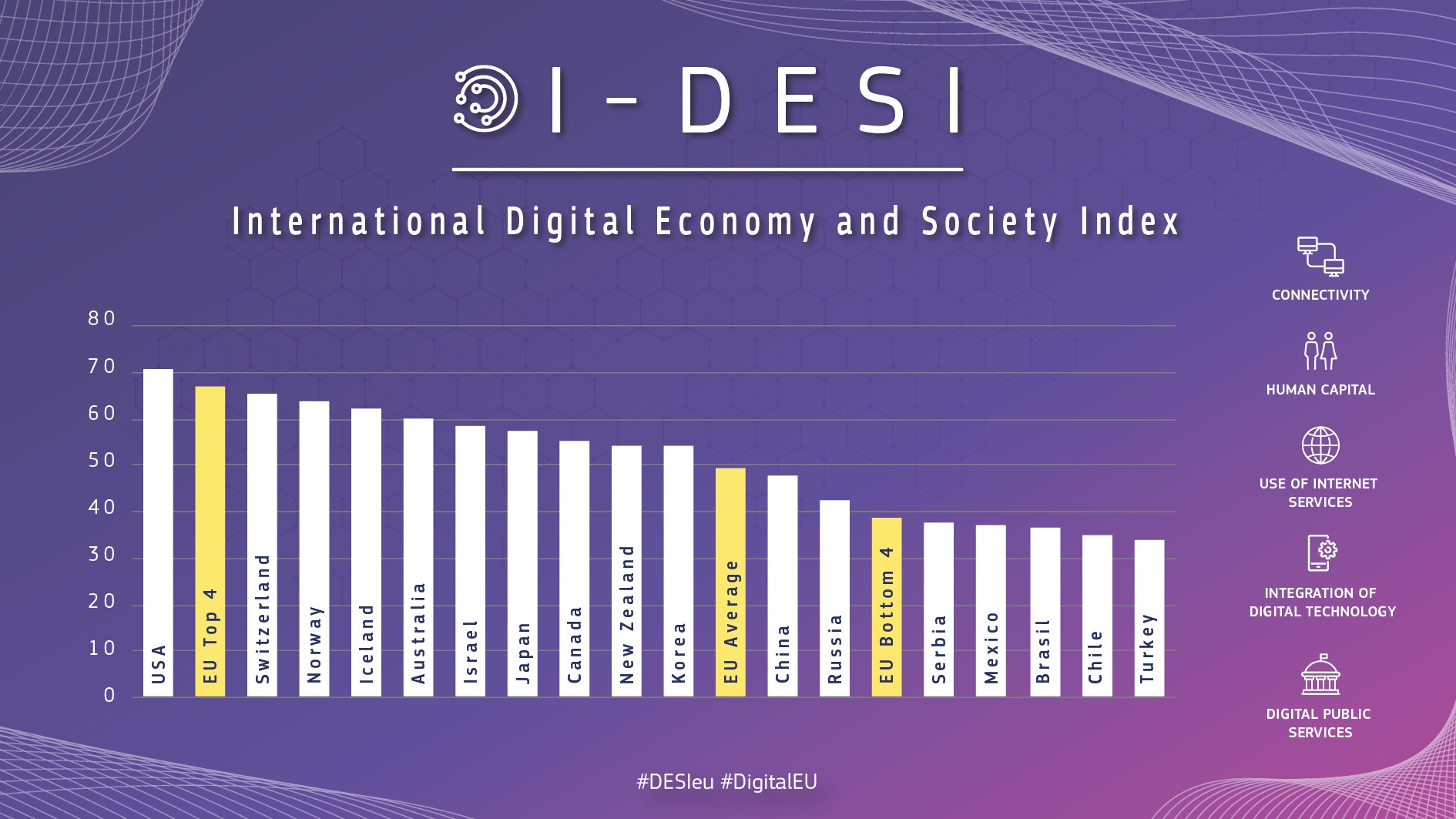 Breaking down the five dimensions of I-DESI

The integration of digital technology dimension looked specifically at the digitisation of businesses, as well as the development of online sales channels.  In 2017, the average EU27 Member State performance for this dimension drew level with non-EU countries for the first time since 2013.  In 2018, the EU27 slipped further behind again.  The European Digital Strategy and the Recovery and Resilience Facility have several economic objectives, including job creation, competition, and economic growth.  Investment and support in this area would help to achieve EU objectives and could make EU27 Member States more competitive with non-EU countries.

Its aim is to mirror and extend the results of the European Commission’s Digital Economy and Society Index (DESI), by measuring the performance of non-EU countries.

The 2020 I-DESI utilises datasets over a four-year period from 2015 to 2018 to provide trend analysis.  It brings together a set of 24 indicators similar to the current EU28 DESI digital policy mix.

These indicators are used to provide insights into the five different dimensions presented above.  When analysed together, they also offer a single overview of the digital economy and society.  While the numbers have little meaning in themselves, the comparative figures are where the story really lies. Comparisons enable the identification of gaps between the performance and capabilities of the 45 countries studied (27 EU Member States and 18 non-EU countries).  Importantly, this international study enables the comparison of EU27 digital performance with a peer group of 18 countries from around the globe.

The I-DESI will help countries to identify areas requiring investments and action to reach the levels of the best performing global countries.  It will also be useful in monitoring progress of the 2020 EU digital strategy and supporting development of the Recovery and Resilience Facility of the Annual Sustainable Growth Strategy.