eGovernment in Europe is characterised by a “virtuous circle”: public administrations develop better and better digital services because user demand is high; and more and more users access government services online because these services are available and easy to use.

The 2020 eGovernment Benchmark report shows remarkable improvements across the board: Over the last two years, every one of the 36 countries measured has improved the digital delivery of public services according to the four benchmarks considered in the assessment. However, the scale of improvement and the overall performance vary substantially. 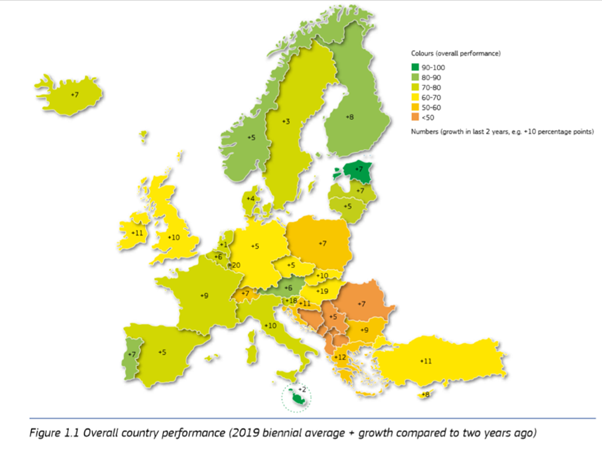 In terms of progress, Luxembourg, Hungary and Slovenia have made the greatest advances in the last two years, rising with 20, 19 and 18 percentage points respectively, resulting in corresponding overall scores of 79%, 63% and 72%.

How is performance measured?

In order to give a consistent and repeatable means of making valid comparisons, performance of online public services is evaluated against four “top-level” benchmarks. The average score of the four top-level benchmarks represents the overall eGovernment performance of a country, from 0% to 100%

Overall performance is measured as an average score of four top-level benchmarks (which each comprise multiple sub-indicators):

These benchmarks are assessed on the basis of a set of eight life events. Each life event consists of a user journey representing common public services that citizens or businesses will go through. Four life events are measured each year. Hence, the 2020 report presents the findings for data collected in 2018 and 2019.

The data to assess these indicators are collected by Mystery Shoppers. Mystery Shoppers are citizens of each of the observed countries who act as prospective users and follow a detailed, objective and standardised evaluation checklist. The Mystery Shopping has recently been complemented by automated open tools for the assessments of Mobile Friendliness and Cybersecurity.

Where Does Europe Stand?

User Centricity: The focus on end user experience has seen this top-level benchmark increase to 87% (4 percentage points higher than two years ago). More than three out of four public services can be fully completed online (78%). Users can find the services they are looking for via portal websites 95% of the time, and information about these services online nearly 98% of the time.

Of the three sub-indicators, the most recent one, Mobile Friendliness, scores lowest, albeit having seen the highest increase, up from 62% two years ago to 76% today.

More than 3 in 4 public services are mobile-friendly

Transparency: This area experienced the biggest improvement over the last two years, now sitting at 66%, increasing from 59% (7 p.p. higher than two years ago). Users receive a delivery notice when a service is completed in 64% of cases. Moreover, 98% of the websites were transparent about the organisational structure, mission and responsibilities, access to information, the possibility to request additional information and where to find the corresponding legislation. However, the time it will take to complete online forms and obtain a service is only clear for just under half of the services (46%). It is also often unclear how personal data is processed by  public administrations. The possibility to see whether your data has been used is present in 64% of the countries, when your data has been used in 42% of the countries and by whom in only 17% of the countries.

Transparency on personal data use must improve

Key Enablers: European countries should improve the implementation of digital enablers in eGovernment service delivery. In total, this top-level benchmark stands at 61% across the EU27+ (4 p.p. higher than two years ago), showing ample room for improvement. On a positive note, sending and obtaining official documentation via digital channels is possible for two-thirds (68%) of the services. Two thirds (67%) of government organisations allow their users to receive letters via email rather than post. Ten countries even implemented a digital post-box across all eight Life Events. However, users can use their own national eID for only half (57%) of the services that require online identification. Moreover, only half (54%) of online forms contain pre-filled data to ease completion.

Where does the EU fare best? Where should we improve?

With few exceptions, the countries at the lower end of the performance scale have improved, thus lowering the gap between frontrunners and laggards. The differences in variance of digital public service delivery at different administrative levels within one country is also diminishing: The difference between the online availability at national and local level now stands at 12 p.p., compared to 20 p.p. two years ago. Furthermore, two years ago, 12 countries saw a performance gap of 25 p.p. or more. This number has since decreased to only 5 countries.

With few exceptions, the countries at the lower end of the performance scale have improved, thus lowering the gap between frontrunners and laggards. The differences in variance of digital public service delivery at different administrative levels within one country is also diminishing: The difference between the online availability at national and local level now stands at 12 p.p., compared to 20 p.p. two years ago. Furthermore, two years ago, 12 countries saw a performance gap of 25 p.p. or more. This number has since decreased to only 5 countries.

Differences in public service provision between and within countries are diminishing

However, other gaps persists, such as the differences in Online Availability between business-related services and services targeting citizens.

One of the key obstacles for the cross-border use of digital public services are problems with access to procedures requiring authentication. Foreign national eIDs are accepted for only 9% of the services that citizens can access with a domestic eID. This indicates that the cross-border acceptance of eIDs still requires  investments by the EU27+.

Cybersecurity remains a challenge for government websites: Only 20% of all URLs assessed meet half of the 14 basic security criteria evaluated. This underlines the importance of significantly enhancing website security levels to ensure that users can trust public sector websites and services.

Success breads success: The study’s “benchlearning” analysis points towards a ”virtuous circle”: public administrations develop better and better digital services because user demand is high; and more and more users access government services online because these services are available and easy to use.

Making it possible for citizens to obtain services across European borders is key for reaping the benefits for the European single market. New opportunities, such as increasing the compatibility with mobile devices, are being seized by many public administrations. Nevertheless, governments must better inform citizens on the use of their personal data, and security challenges have not been fully dealt with yet. Cross-border service provision remains a priority for Europe.

The eGovernment Benchmark is a yearly monitoring instrument of the EC to provide insight into the use of digital technologies in the public sector.

The eGovernment Benchmark report evaluates progress on key components of the eGovernment Action Plan 2016-2020, the Tallinn Declaration and the accomplishment of a European Digital Single Market. The eGovernment Benchmark uses eight life events, measured every two years to capture the landscape of public services: Business start-up, Losing and finding a job, Studying and Family are observed in the even years, Regular business operations, Moving, Owning and driving a car and Starting a small claims procedure in the odd years. Given the methodological update in 2016, only a select number of indicators allow for comparisons over time.