The municipality of Patmos (Greece), located in the southern Aegean Sea and famous for the vision of John as found in the Book of Revelation of the New Testament, is one of the proud winners of the second WiFi4EU call.

Thanks to the awarded voucher of EUR 15,000, the island will provide its citizens and visitors with free internet access, moving one step closer to becoming a digital community.

Over the recent years, Patmos has become a destination preferred by nature lovers and other holidaymakers who seek to experience this location’s spiritual atmosphere, in a setting of beautiful land and seascapes. In 1981, Greece declared Patmos a “Sacred Island'', and in 1999 UNESCO included The Historic Centre (Chora) with the Monastery of Saint-John the Theologian and the Cave of the Apocalypse in its World Heritage Site List. Patmos is also part of the COESIMA network, as one of the seven most important pilgrimage sites in Europe, making free and fast internet even more useful for the large number of visitors staying on the island. 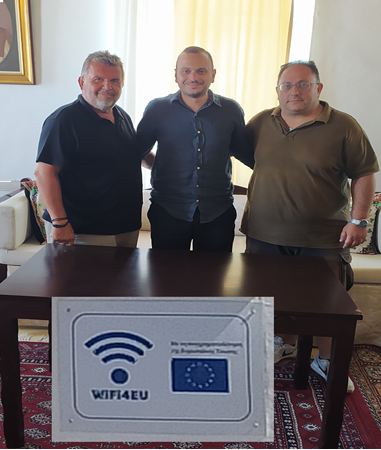 In total, 10 Wi-Fi access points were installed. They can be found throughout the island, including in Patmos Town (a UNESCO Cultural Heritage Site), in Chora's Agia Lesvia square, in Chora's Municipal Market, in Skala and in Grikos and Kampos settlements. The installation process was very smooth and was never compromised, not even with the outbreak of the COVID-19 pandemic.

Actions such as that of WiFi4EU benefit the municipality, citizens, visitors and, ultimately, the country as a whole.

The WiFi4EU initiative has clearly established a strong link between European citizens and institutions, as well as a growing awareness of the EU’s digital potential to contribute to people‘s daily lives, in particular those living in small islands and along the Greek borders.

Patmos municipality is now ensuring that everyone has access to high-quality connectivity and that they can feel a part of the island's digital transformation.