eGovernment Benchmark 2018: the digital efforts of European countries are visibly paying off

The 2018 eGovernment Benchmark report shows constant improvement in user-centricity and mobile-friendliness of digital public services. But more effort is required in cross-border mobility in order to fulfil Europe's ambition of creating a Digital Single Market. Transparency and the use of eIDs must be further improved as key drivers for trust in digital government.

The eGovernment benchmark 2018 report reveals that 10 EU countries (Malta, Austria, Sweden, Finland, the Netherlands, Estonia, Lithuania, Latvia, Portugal, Denmark) and Norway are delivering high-quality digital services with a score above 75% on important events of daily life such as moving, finding or losing a job, starting a business or studying. At the same time, bottom perfoming countries are catching up bridging steadily the performance gap with the ambition to fulfil Europe's goal of creating a Digital Single Market.

Overall performance is measured as an average score of four top-level benchmarks:

Progress is visible for all four top-level benchmarks. Europe is most advanced in terms of User-centricity, showing that public administrations keep an eye on user needs and preferences. Despite improvements, further efforts are needed to uplift the eGovernment dimensions of Transparency, Cross-border mobility and Key enablers.

User centricity is the most matured top-level benchmark in Europe with an overall average of 82%. It is still improving. For instance: over the last four years, online availability has risen with 13 p.p., broadening the online scope of public services. Moreover, an initial gap between the top and bottom five performing countries of 64 p.p. was decreased with 10 p.p. over the last four years. Encouragingly, public sector services are also increasingly mobile-friendly (now standing at 62%), allowing users to find information and obtain services anytime, anywhere.

The top-level benchmark Transparency stands at 59%, urging public entities to further embrace transparency as a key driver for trust in digital government. While analysing trends among eight life events over four years in time, it stands out that public entities have difficulties clarifying service delivery processes in a clear and transparent way (ranking 54%). Correspondingly, the digital divide of 65 p.p. between the best and worst performing countries on transparency of service delivery was only limited with 5 p.p. in comparison with the 2012 and 2013 results.

Transparency of public organisations is the highest scoring indicator of this benchmark, at 71%. Organisations are particularly clear on their mission and responsibilities, organisational structure, relevant legislation, and how users can request additional information.

The top-level benchmark Cross-border mobility reaches 54% and reveals that the Digital Single Market needs focussed attention to open digital borders for both citizens and businesses. Nevertheless, a positive trend is continued: the online availability of services to non-national users scores 66%, compared to 43% four years ago. Furthermore, and compared to the life events measured in 2012 and 2013, the current cross-border online availability level shows that the least performing countries are catching up, closing the initial gap of 44 p.p. with 11 p.p. effectively.

The top-level benchmark Key enablers scores 54%, showing European nations have ample room to implement key enablers in their service processes. Public administrations could for instance optimise reuse of (personal) information already provided by users. In effect, the authentic source indicator holds at 53%, although countries substantially differ. This difference between the top and bottom countries has only lowered with 4 p.p. in four years (originally at a 78 p.p. difference).

To stimulate progress, countries with similar characteristics are compared on their eGovernment performance through selected complementary indicators from external sources focussing on the level of adoption and of investment in digital technologies. Such a benchlearning exercise helps to understand which contextual factors promote or hamper innovation. eGovernment performances are measured by two proxies: Penetration and Digitisation. 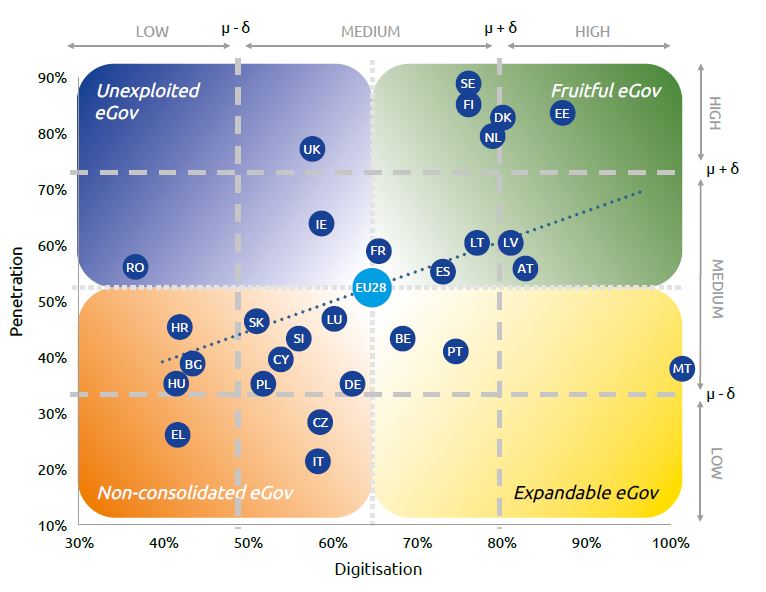 Bulgaria, Denmark, France, Greece, the Netherlands, Poland, Slovenia all perform in line with the performance expected based on their characteristics.

The 15th eGovernment Benchmark report is the sixth edition of the measurement made according to the eGovernment Benchmark Framework 2012-2015.  It evaluated progress on key components of the eGovernment Action Plan 2016-2020, the Tallinn Declaration and the accomplishment of a European Digital Single Market. A complete measurement of all eight life events takes two years, covering public services related to four government domains each year: business start-up, losing and finding a job, studying and family life, as well as regular business operations, moving, owning and driving a car and starting a small claims procedure. Given the methodological update in 2016, only a select number of indicators allow for comparisons over time.