The European High Performance Computing Joint Undertaking (EuroHPC JU) aims to improve quality of life of European citizens, advance science, boost industrial competitiveness, and ensure Europe’s technological autonomy. It is a legal and funding entity, created in 2018 and located in Luxembourg. It pools together the resources of the European Union, 32 European countries and three private partners with the ambition of making Europe a world leader in supercomputing.

The JU’s main activities aims to:

The EuroHPC JU in action

In July 2021, the Council adopted a new regulation on establishing the new European High Performance Computing JU and repealing Regulation (EU) 2018/1488. It sets out an ambitious mission and is accompanied by a substantially larger budget of €7 billion for the 2021-2027 period, in order to:

Benefits of the EuroHPC Joint Undertaking

The EuroHPC JU enables European countries to coordinate their supercomputing strategies and investments together with the EU. Since its creation, the EuroHPC JU has substantially increased investments in HPC at European level, and has started to restore Europe’s position as a leading HPC power globally.

The development in Europe of a competitive HPC ecosystem and of an integrated world-class exascale supercomputing and quantum computing capability will be crucial. This will ensure that the EU maintains a leading position in the digital economy and contribute to strengthening Europe's technological and data autonomy.

As part of its research and innovation agenda, the EuroHPC JU is also strengthening the European knowledge base in HPC technologies and bridging the digital skills gap, notably through the enhancement of the network of national HPC Competence Centres. The Competence Centres will act locally to ease access to European HPC opportunities in different industrial sectors, delivering tailored solutions for a wide variety of users. 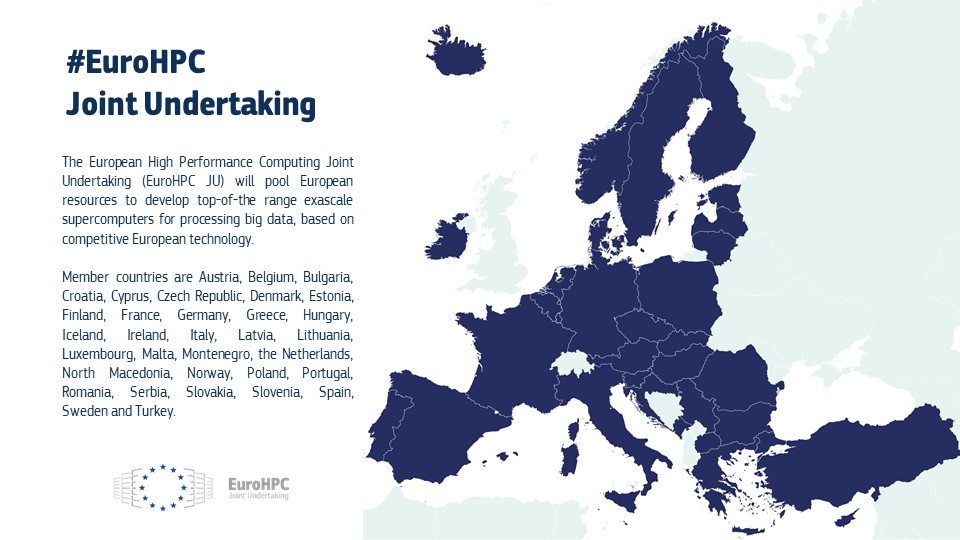 The EuroHPC Joint Undertaking is composed of public and private members:

Other Member States and Associated States to Horizon 2020 Europe or Digital Europe Programme  can also join the Joint Undertaking at any moment.

The governance structure of the EuroHPC Joint Undertaking is composed of:

The EuroHPC Joint Undertaking is jointly funded by its participating countries and private members. The budget of the JU is of around EUR 7 billion for the period 2021-2027. Its funding is allocated as follows:

An equal investment will be from the participating states, while the private members contribution amounts to € 900 million (as in-kind and cash contributions).

As no European country has the capacity to develop world-class supercomputing resources individually, the Joint Undertaking provides financial support in the form of procurement or research and innovation grants to participants following open and competitive calls.

The EuroHPC JU is already equipping the EU with a world-class infrastructure of pre-exascale and petascale supercomputers, and developing the necessary technologies, applications and skills for reaching full exascale capabilities (performance level capable of executing ten to the power of eighteen operations per second) by 2023.

To date, five supercomputers are now fully operational: LUMI in Finland (which ranks number 3 in the world), and LEONARDO in Italy (which ranks number 4 in the world), Vega in Slovenia, MeluXina in Luxembourg,  Discoverer in Bulgaria and Karolina in the Czech Republic. Two supercomputers are underway: Deucalion in Portugal, and MareNostrum5 in Spain.

The EuroHPC JU has also announced five new hosting sites for a new generation of European supercomputers in Germany, Greece, Hungary, Ireland and Poland, with one of them to be Europe’s first exascale supercomputer: JUPITER, which will be hosted in the Jülich Supercomputing Centre in Germany. Just as the existing EuroHPC supercomputers, the new sites will be connected and available to serve a wide range of European users in the scientific community, as well as industry in particular small and medium businesses, and the public sector across the EU and participating countries.

Further to this, the EuroHPC JU has also announced six sites to host quantum computers in Czechia, Germany, Spain, France, Italy, and Poland. The quantum computers will be integrated with existing supercomputers.

The Commission has adopted today the main Horizon Europe work programme 2023-24, with around €13.5 billion to support researchers and innovators in Europe to pursue breakthrough solutions for environmental, energy, digital and geopolitical challenges.

We welcome the launch of a new Digital Partnership between the EU and the Republic of Korea. In an increasingly volatile world, the need to work with partners who share democratic values is more important than ever to address common challenges.

The Commission, together with the European High-Performance Computing Joint Undertaking (EuroHPC JU), the Italian Ministry of Universities and Research and the CINECA consortium have inaugurated Europe's latest supercomputer: LEONARDO, located at the Bologna Technopole, in Italy.

India and EU sign an agreement for Cooperation on High Performance Computing, Weather Extremes and Climate Modelling, and Quantum Technologies.