EU countries and industry are cooperating to prepare the large-scale deployment of 5G corridors for Connected and Automated Mobility on European transport paths.

The deployment of 5G cross-border corridors along transport paths throughout Europe is expected to contribute to the green and digital transformation of the EU economy and society. In particular, 5G-enabled Connected and Automated Mobility (CAM) is seen as a major enabler for improved road safety, optimised road traffic, reduced CO₂ emissions, and industrial competitiveness of both the transport and mobility sector.

The Commission has acknowledged the key role played by 5G cross-border corridors both in Europe’s Digital Decade Strategy and in the Sustainable and Smart Mobility Strategy. 5G corridors also constitute one of the multi-country projects (MCPs) identified in the Digital Decade Strategy and thus represent one of the main strategic investment areas of the Recovery and Resilience Facility.

In order to prepare the large-scale deployment of 5G corridors, the Member States, industry, and the Commission have joined their efforts over the last few years to conduct testing and trials of 5G-enabled CAM, with the support of Horizon 2020 under the 5G Public-Private Partnership.

The Connecting Europe Facility (CEF) Digital programme over the 2022-2027 period will provide financial support to large-scale deployment of 5G corridors, with a planned budget of around €1 billion for this time period. The first Multi-annual Work Programme for the 2021-2025 period, adopted on 16 December 2021, sets a focus on the deployment of cross-border sections along 5G corridors. The first CEF calls were launched in January 2022.

As part of the European Commission’s 5G Public Private Partnership, the EU supports 7 5G cross-border corridor trial projects for large-scale testing of 5G enabled CAM solutions, which are co-funded under Horizon 2020. The 7 projects, launched in November 2018 and September 2020, trial 5G technology applied to CAM over cross-border sections of motorways, rail, waterways and ports across 11 borders:

In 2017, following a letter of intent signed on the occasion of the Digital Day in Rome and a round table on connected and automated driving (CAD) in Frankfurt, Member States and industry agreed to establish a pan-EU network of 5G cross-border corridors. On this basis, a large number of Member States and regional authorities have signed and/or announced bilateral agreements for test corridors.

Today the following important initiatives/projects are in place: 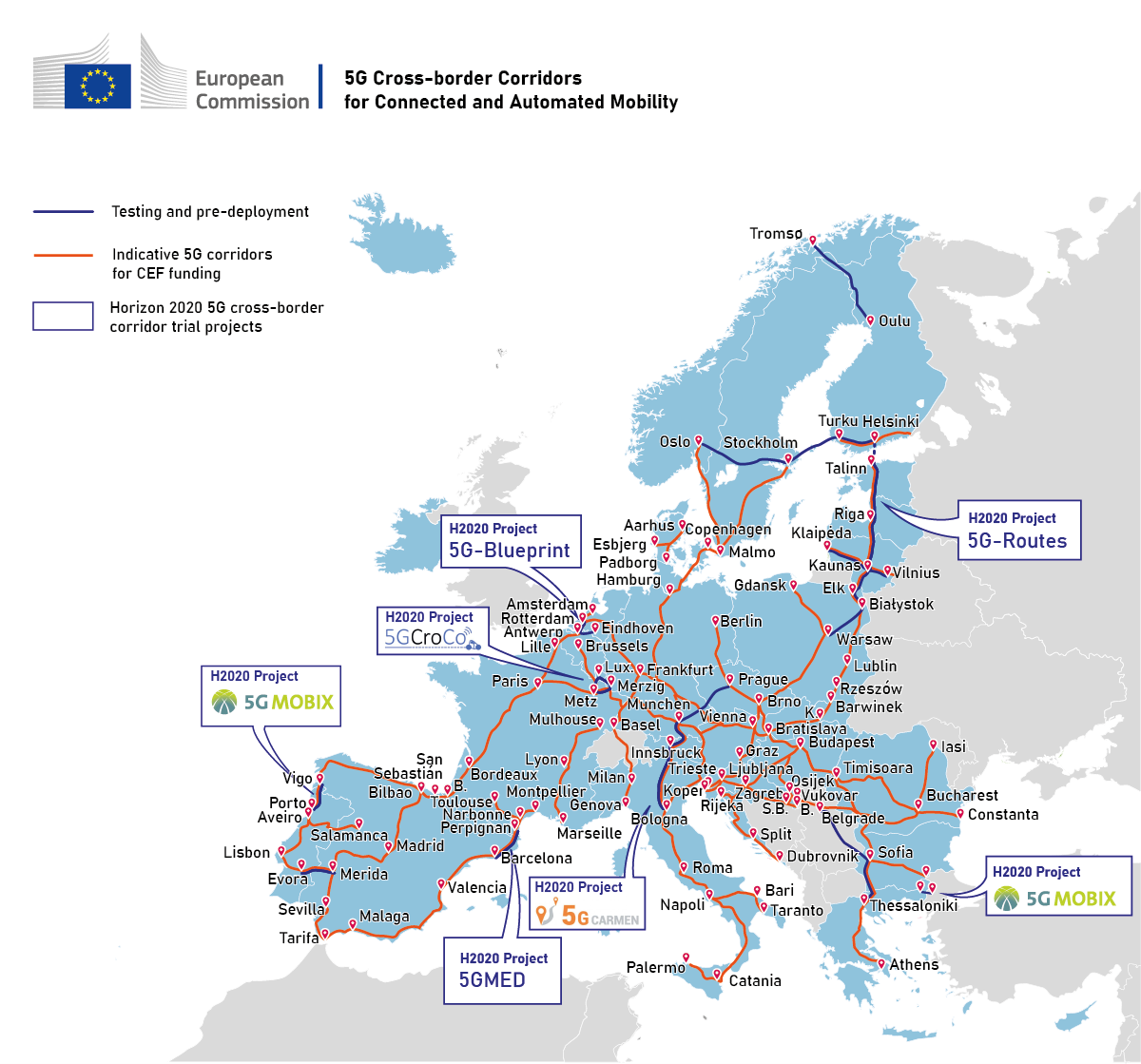 The Commission has launched the second set of calls for proposals under the Connecting Europe Facility Digital programme.

The Smart Networks and Services Joint Undertaking (SNS JU) selected its first portfolio of 35 research, innovation, and trial projects to enable the evolution of 5G ecosystems and promote 6G research in Europe. With a combined funding for this new portfolio of around €250 million under Horizon Europe, the aim is to build a first-class European supply chain for advanced 5G systems and build Europe’s 6G technology capacities.