The EU policy promoting strategies for data, cloud and edge, and cybersecurity are central to the digitalisation of the energy system.

Standardisation: from Mandate 490 on smart grids to SAREF and to a fully interoperable IoT edge-cloud ecosystem

Standards are needed to cover the communication needs of grid management, balancing and interfacing with millions of new renewable energy sources, as well as for the complex interactions of the new distributed energy market, which is enriched with demand-side response services. They are also crucial for the transition to electric vehicles and the integration of smart homes and buildings.

Figure 1: Towards a common language for demand-side flexibility (Source: EEBUS)

The European Commission has worked towards the interoperability of solutions and standardisation under the umbrella of the Smart Grids Task Force, successfully completing the Standardization Mandate  M490 to European Standardisation Organisations (ESOs) to support European Smart Grid deployment.

At present, the Commission together with the Smart Grids Task Force is engaged in the development of implementing acts for metering and consumption data interoperability, as well as for network codes on demand-response and cybersecurity. 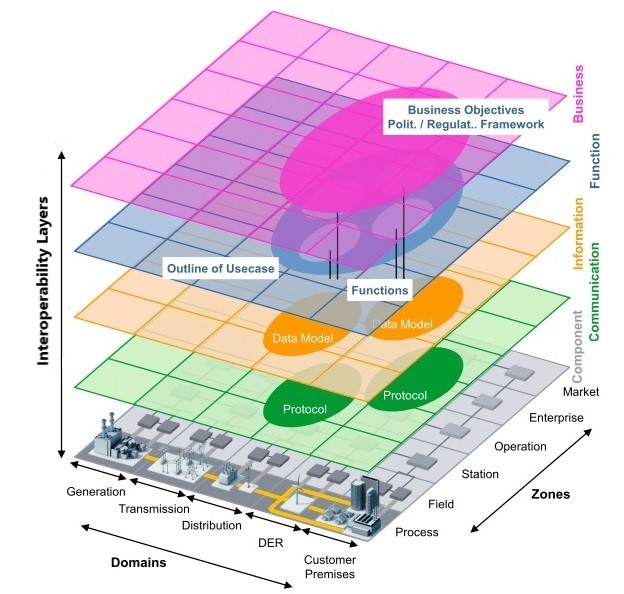 As a clear example of a European success story, the Commission, benefiting from valuable contributions from its stakeholders, fostered the creation of a common interoperability language known as Smart Appliances Reference (SAREF), which became a standard of European Telecommunications Standards Institute (ETSI) and oneM2M – the global initiative for IoT standardisation – in 2015, and has been implemented in commercial white goods products of leading European suppliers since 2017. SAREF later evolved into a modular ontology with extensions for different verticals, including energy, allowing the creation of an interoperable IoT ecosystem.

The SAREF ontology and its SAREF4ENER and SAREF4Building extensions are now being piloted at a large scale within the framework of the Horizon 2020-funded project InterConnect.

As the energy system evolves and diversifies, the many new players involved in generation, supply, distribution, or consumption bring another important asset: their data.

In today’s reality where everything is connected, data has become the most valuable resource of our economy. In February 2020, the Commission published the European Data Strategy, which underlines the importance of handling and sharing data in accordance with the EU values.

Two years later, on 23 February 2022, the Commission proposed a Regulation for harmonised rules on fair access to and use of data, also known as the Data Act. This Act will ensure fairness by setting up rules regarding the use of data generated by Internet of Things (IoT) devices. Along with its Data Strategy, the EU announced the development of common European data spaces in nine domains and sectors of strategic importance, including energy.

The Commission aims to support the deployment of this data space under the Digital Europe Programme (DIGITAL) in 2023-2024, after preparing the groundwork via several soon-to-be-launched Horizon Europe energy data spaces projects. The legislative frameworks for implementing the data spaces must strike the right balance between the general set of rules applicable to all common European data spaces and the energy sector-specific rules and pre-existing or planned investments.

These measures in combination with the effective implementation of the Clean Energy Package (particularly the data related provisions), along with the relevant actions proposed under the Digitalisation of Energy Action Plan, give a good foundation to deliver towards seamless data flow within the energy domain, as well as across sectors and borders within the EU, and help to accomplish a single European data space.

A European Strategy for Cloud and Edge

As announced in the European Strategy for Cloud and Edge, the Commission will support research, development, and large-scale deployment of next-generation cloud infrastructures and services across Europe. These new cloud and edge capacities will be highly secure, completely interoperable and offer open multi-vendor cloud platforms and services. They will enable common European data spaces and foster innovative data-sharing ecosystems based on cloud and edge solutions.

Rendering the European power grid smarter will present grid operators with new technical challenges, notably in terms of cybersecurity. The more devices get connected to the energy and power system, the more they offer potential access points for cyber-attacks to a very critical infrastructure. Because of the energy infrastructure’s centrality for our economies, it is essential to avoid any disruption of operations and minimise the vulnerability of industrial control systems in the electrical, water, oil, gas, and data sections. As cyber-threats know no borders, it is imperative that there is a permanent operational cooperation framework and information exchange in place when faced with cyber-attacks.

In December 2020, the Commission proposed a European Cybersecurity Strategy, aiming to bolster Europe's collective resilience against cyber threats and help to ensure that all citizens and businesses can fully benefit from trustworthy and reliable services and digital tools. Whether it is the connected devices or the electricity grid that European businesses or citizens use, they deserve to do so with the assurance that they will be shielded from cyber threats.

Furthermore, the European Commission is making proposals to address both cyber and physical resilience of critical entities and networks: a Directive on measures for high common level of cybersecurity across the Union (revised NIS Directive or ‘NIS2’), and a new Directive on the resilience of critical entities. The NIS2 proposal places particular importance on the energy sector by expanding its scope to cover more and new types of entities. Each of these will complement the work on the Network Code on Cybersecurity undergone in the context of the clean energy for all Europeans provisions.

The Digital Assembly 2022 is co-organised by the European Commission and the French Presidency. It will focus in particular on issues related to EU sovereignty and autonomy.

After last year’s event was made completely virtual due to pandemic restrictions, experts will be able to gather at IoT Week 2022 physically in Dublin.

This online workshop will explore silicon photonics in the context of the Key Digital Technologies Joint Undertaking (KDT JU).

This series of one-hour online events by the European Patent Office aims to meet the needs of business decision-makers, venture capital investors and IP professionals, in small and medium-sized enterprises in particular. The events focus on the role of IP rights to enhance business. Furthermore, HTB Forums display the importance of IP strategies for attracting investors and increasing company value.

Digitalisation of the European Energy System

Interoperable and open digital solutions, as well as data sovereignty, are key to the digital transformation of the energy system.

EU programmes to support the digital transformation of the energy system

EU programmes supporting research and innovation, deployment, and cross-border connectivity infrastructure are crucial to the digitalisation of the energy system.